Just a reminder for myself
Today is: Hunting day

That "gay boy" you punched in the hall today? He just committed suicide.
The girl you laughed at because she had no hair? She survived cancer and will always be stronger than you.
That boy you called lame? He has to work every night to support his family.
That girl you pushed down the stairs? She's abused enough at home.
The old man you made fun of because of the ugly scars? He fought for his country.
The girl you called fat? She's starving herself.
The boy you made fun of for crying? His mother just died.
The girl you called ugly? She hopes beyond hope that people will like her.
You think you know these people, but you freaking don't.
Re-post this if you are against bullying. I bet 99% of you won't, but the 1% with a heart will.
This has been reposted from Brooke (#49110) to stand against bullying.

Currently looking for a heir here willing to offer up to 15 our GB mixed with items.

Currently working on den CSS forgive me if my den looks bad or has a random line of code somewhere.

I'm taking down my den CSS for now

Consider this a dump anything you don't want , junk ? dump it here, I also take lionesses, adols and cubs. If you have a male that you don't want you'll have to PM me first. 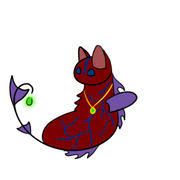