I am pretty much always looking for RP partners as it's near impossible to keep them. I am willing to listen to ideas, and maybe meet some new people I haven't met or RPd with before. I am 3 hours ahead of Lioden time (EDT) Also I do curse like a sailor in RPs, if that bothers you I will tone it down.

I prefer Male x Male, can try Male x Female. Please do not force me to RP Male x Female and I will not force you to RP a pairing that you dislike or aren't willing to RP. I will not do FxF only because of bad experiences in the past. You must be open minded if we do Male x Male because of a few reasons. Most of my RP ideas involve fluff, happy things and my characters having kids. I can do some darker stuff, I tend to torment my characters with injuries. Just easier with Dominic since he plays a pretty dangerous sport. But if you do want to RP with me, let me know. I prefer RPing on Discord for personal reasons, will only RP here on PMs. I will not do forums.

Also please for the love of lions, if you have anything that bothers you in RP plots, please do let me know. I don't want any secrets. I will tell you mine since I do have a few things that bother me. I also have a few ideas that I have wanted to do for awhile.

About Me
I rarely accept random friend requests. Only exceptions would be is if we were either breeding partners, or RP partners. Or unless we can talk about the same things that interest us. Otherwise, I don't accept them unless I know you.

I'm just your average adult female who works 8am to 2pm EDT (5am to 11am Lioden time). I am currently 3 hours ahead of Lioden time. I love hockey, which is pretty obvious. And I also love RPing, but so far having not much luck finding partners that will stick around or not ghost me. RP info is above.

I also love looking for antlers that have been shed by deer from January to March in my area all depending on age of the bucks, so I may be in the woods if I'm not RPing or working. I do projects for my county fair as well, so I do get busy in the late spring to early summer with those. As for age, let's just say I remember the 1990s and part of the 1980s very well.

Muties I've Had or Have
Dwarf
Foldie
Tailless
Overgrown Teeth
Overgrown Claws
Polycaudal
Achromia
Primal Fangs
All piebalds except a few of the new ones
Most patches except the new ones
Most mane muties except for Noble, Villous, Succubus, Ruffled and Frizzy
All primal variations
Blind
Bobbed Tail 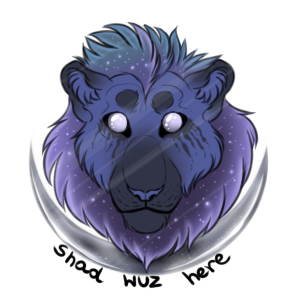