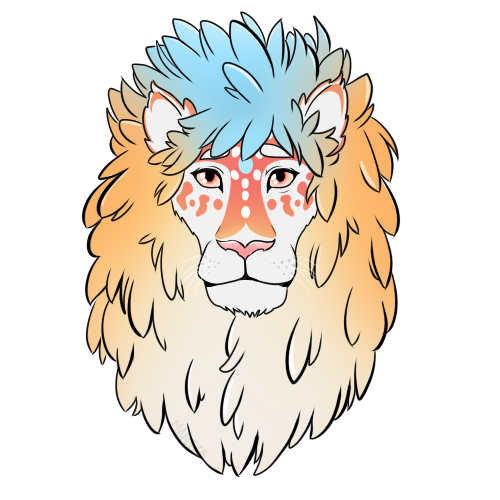 I'm Kine/Sal depending on how you know me and I fully blame Deertush for getting me into this game. I'm from Texas and love to design characters of all kinds, though mainly the human/spooky variants.

I don't like sunshine, love animals, really like hot tea, and love flashy Lions. My favorite bases are Sunrise, Elysian, Frostbitten, and Scoundrel. I'm on most every day and am pretty easy to get along with [I think], so just shoot me a message!

I help run an LGBT+ Overwatch Discord in my spare time as well.

King Chroma [also known as Chroma Sunrise] was brought to these lands by the former King Eranoc as a young cub. Eranoc, who was an older lion when he was crowned by King Evrain I due to no blood heir being of age yet, required the help of a younger hand to protect these lands.

The initial intentions were to crown one of Evrain I's sons once King Eranoc passed away. However the old King, in a moment of rage and bitterness, bestowed Chroma Sunrise with the title and drove King Evrain's blood out. He felt that Evrain II's failure to yield any successful patrols or defeat him was an affront to Evrain the Great's lineage.

Chroma's intentions were never to become a king, but he has taken to the role well and has sired many bright and vibrant cubs. He is a quiet soul with many thoughts but few words, he saves those for the most important moments. His many attempts to extend the olive branch with Evrain I's surviving blood, King Kairos Rosair I, have not yielded any positive results.

Though he does not blame the rival king for seeing him as the stranger who stole his birthright, he does long for peace. Perhaps even an alliance between the kingdoms one day.

** If you are interested in commissioning me, please reach out over DMs either on Lioden OR on Twitter detailing exactly what you want. You MUST have a reference image/color palette ready otherwise I will NOT accept your commission! **

This territory has 3 lion(s) that may leave soon due to their low moods or starvation!